Alumni, students, faculty and staff share their intimate stories about the benefits and the early challenges of being a part of Wake Forest’s diverse learning community.  Brought to you by the creative minds within Wake Forest’s documentary film program and the campus’ NPR affiliate station 88.5 FM WFDD, the Faces of Courage multimedia series is a compilation of experiences that underscores the enduring value of diversity and inclusion.

Watch, listen, learn; and we encourage you to leave comments. Want to share your story? Contact us to find out how.

Content will be updated throughout the year, so please visit us often to hear more stories. 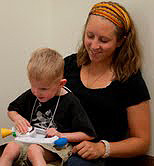 Deanna Margius describes the benefit of going down the path less traveled. She is studying biology and Spanish at Wake Forest to become an interpreter and a healthcare provider. This summer she interned at the Industries for the Blind, where she learned through friendship with a young camper that people are “literally” more than meets the eye. Her experience was life-changing and underscores her commitment to building meaningful relationships, regardless of individual differences.

David Matthews voted “never integrate” Wake Forest when asked on a student poll in the early 1960s. However, by the time he graduated in 1962, his classes and an encounter with Ed Reynolds, WFU’s first black student, broke the generational cycle of prejudice in which he grew up.

Check back during the semester for narratives from Wake Foresters.

In the 1950s and 1960s, many of Wake Forest’s peer universities faced court-ordered integration. Wake Forest, as a private institution, was not under federal mandate. The process of desegregation was prompted primarily via student petitioning and protest. Find out how and why we were the major first private university in the South to integrate from those directly involved in the decision through the short film, “The Impetus to Desegregate.” This is part 1 of a 5 part series that chronicles the history of diversity and inclusion at Wake Forest.

Enjoy a variety of Latino traditions, including dance and poetry, in this video capturing Wake Forest’s Celebration of Latino Heritage. Performers from the student organizations, Salsa Club and Can-I-Poet, as well as Ballet Folklorico — a Mexican dance group with incredible flair and style — helped make this occasion which highlighted the vibrant Latin culture and history of Wake Forest memorable. Special honorees at the event included Wake Forest’s first Latino graduates, Carlos Alberto Perez (’65) and Peter Bondy (’67).

On March 19, 2013, Wake Forest and the North Carolina Diversity and Inclusion Partners brought together higher education leaders, industry executives, and national experts to discuss how to prepare students today to be employees in a diverse and global workforce. This was a featured event of Wake Forest’s commemoration of its 50th anniversary of racial integration. The symposium provided an opportunity to build relationships across disciplines, share research, and hear “best practices” and policy-oriented issues related to transforming institutions of higher education.

Jamie Dean (’05, JD/MBA ’09) is a renaissance man. This former student trustee is an Olympic medalist, successful attorney, dedicated father and husband, and committed to helping others with disabilities. Though completely blind, Jamie leads a life in service to others – a true model for courage. Watch and learn more about his inspiring journey at Wake and afterwards.

Gary Lowman (’02, JD ’07) and Brock McCormack (JD ’07) are intelligent, world-travelers, socially conscious, and most importantly, in love. They met in 2002 while studying at the WFU School of Law. Inspired by a negative article in a student publication, Gary and Brock formed the LGBTQ group, OutLaw, and helped build a community of support. They are an example of how courage and love unite to bring meaningful change.
See also: Experience Gary and Brock’s wedding day in this video

S.O.P.H Society sisters with a drive for social justice, Gayle Ford (’73) and Beth Hopkins (’73) championed both gender and racial equality during a turbulent time at Wake Forest. More than 30 years later, their friendship is stronger than ever as is their passion to show how their lives have been enriched by each other’s perspective.

The Homecoming of 1973 was a special one in Wake Forest history. It was first time a black woman was bestowed the remarkable social honor, Homecoming Queen. Listen to Beth Hopkins (’73), the honoree, as she and her S.O.P.H. society sister, Gayle Ford (’73) talk about the historical moment.

J. Glenn Blackburn (’63) doesn’t look like your typical civil rights icon. Though unassuming, he is often credited with leading the movement to end racial segregation at Wake Forest. As leader of the African Student Program, Glenn mobilized student and faculty support to raise money for Ed Reynolds, the first black undergraduate student, to attend Wake Forest.

As the first black graduate, Ed Reynolds (’64) understands in more ways than one the importance of courage. He traveled from Ghana for his enrollment at Wake Forest in 1962, having no idea what awaited him in the American South of the 1960s –- which at the time was in the midst of the Civil Rights Movement. Listen to his thoughtful reflection of what courage means to him.

Poised, resilient and full of spirit are few ways to describe Bob Grant (’68). He became one of the first black athletes to attend Wake Forest when he joined the football team in the fall of 1964. His passionate and inspirational character is undeniable as he talks about what courage means to him.

Mustafah Abdullah (’10) is an inclusion champion motivated by faith. As lead organizer for the interfaith organization, CHANGE, Mustafah is committed to building a stronger community by developing relationships across racial, ethnic, economic, political, social and religious lines. Interestingly enough, he cites his involvement in the interfaith community at Wake Forest as the catalyst for his breakthrough work.

Aileen Socrates-Kelly and Brian Kelly never engaged one another during their first two years at Wake Forest. But while studying abroad together in Salamanca, Spain, their eyes were opened to one another’s unique experiences and similarities, which fortified the love they now share as husband and wife. Listen to what courage means to them and watch for their whole story in the next few weeks.